Transcript:
WILLIAM BRANGHAM: Six years ago, a terrible family tragedy occurred here in rural British Columbia. But over time, it became much more than that. This tragedy set in motion dramatic changes to the laws governing drinking and driving -- changes that supporters say have already saved dozens of lives. That tragedy involved a four year old girl. Her name was Alexa Middelaer.

LAUREL MIDDELAER: Well, it was a beautiful May long weekend and my daughter, Alexa, loved this one particular horse and she really wanted to show her grandparents that horse. I remember saying good bye to her, and then very shortly after that we heard all kinds of sirens. And at that moment I just-- I just knew. I said, "It-- it's Alexa. Something happened to Alexa."

WILLIAM BRANGHAM: A 56 year-old woman doing nearly twice the speed limit, lost control of her car and smashed into the exact spot where Alexa stood feeding the horse on the side of the road. The woman - - who was later convicted and sent to prison -- admitted to police she’d had three glasses of wine before getting into her car.

LAUREL MIDDELAER: When we knew, roadside, that our daughter was dead, I remember my husband just -- in the ambulance -- we both held each other and he said, "This will not break us. This will define us. There will be some good in this."

WILLIAM BRANGHAM: After the accident, Alexa’s parents – Michael and Laurel – launched a campaign to try and change the culture around drinking and driving … and to deter people from doing it…. Their events became a regular feature on local news

LAUREL MIDDELAER (from local news) We will honor our daughter and we will make the necessary changes that, number one… 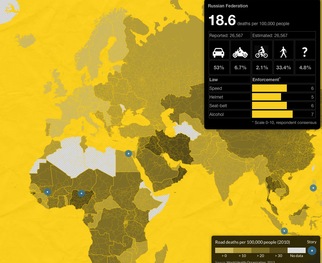 Roads Kill: A Investigation from The Pulitzer Center

WILLIAM BRANGHAM: But they soon realized it would take more than that – they realized they’d have to change the drunk driving laws, which, like in the U.S., sets the legal blood alcohol limit at .08 percent. After lobbying the government for nearly a year -- alongside groups like Mothers Against Drunk Driving – their efforts paid off. In 2010, the Provincial Government not only stiffened penalties against driving at.08, but more importantly, it targeted drivers who fall below that level -- to .05 -- drivers who are not legally drunk. The rationale? Even a few drinks – as few as two for a woman, and three for a man -- can impair your driving ability

The big change was that if you were now caught driving with a .05 blood alcohol level, the police were authorized – on the spot -- to fine you, suspend your drivers license, and immediately impound your car for at least three days. They’d get you out of the vehicle, and a tow truck would haul it away.

In late 2010, police began enforcing the new laws, and police impound lots across British Columbia began filling up. The changes sparked an uproar. Civil libertarians argued it gave the police too much power – and restaurant owners like Mark Roberts said the new laws damaged the economy… he says his business dropped between 10 and 20 percent.

MARK ROBERTS: When the change of drinking-driving laws came out, we knew that was going to have a strong impact on our business.

WILLIAM BRANGHAM: What did you think? That customers would suddenly be afraid and that they wouldn't come to your door?

WILLIAM BRANGHAM: And the impact was immediate. During the first year the new law was in effect, the number of drunk driving deaths in British Columbia plunged. Critics argued that first year was just a fluke. But the second year? The number declined again. A 55% reduction in deaths in just two years.

The message, it seemed, had started getting through to drivers

TIM STOCKWELL: So it was quite well-publicized. And for deterrence to work it's as much about knowing and expecting there being a consequence than it actually be likely. People's perception that they were likely to be caught was probably way higher than it actually was.

WILLIAM BRANGHAM: Tim Stockwell is an expert on alcohol policy at the University of Victoria. He told us he can’t think of a single reform that’s had this big an impact, this quickly. He and his colleagues recently published a peer-reviewed study of the effectiveness of the new laws.

TIM STOCKWELL: These laws epitomize a perfect deterrence theory in action. And it is very important to understand that you don't need draconian, severe penalties. They have to be severe enough. It's more important that they are certain, and that they are swift. So on the spot, losing your car for three days, a week, that's severe enough.

WILLIAM BRANGHAM: The new laws have faced some setbacks: the police had problems with some of their breathalyzers, the government had to ammend the laws when courts ruled that drivers deserved a better appeals process. And last fall a judge ruled in favor of a driver who appealed his 2012 driving suspension. Critics say that ruling that could force a rewriting of the laws. For now, the heart of the new laws though remain intact.

WILLIAM BRANGHAM: What about the argument that there have been so many lives saved by these new rules that yes, it may have taken a hit out of your business, but that to save a bunch of people's lives that that's an OK price to pay?

MARK ROBERTS: Yeah. Well, it's hard to argue that. I'm certainly not going to sit here and say well, we should allow people to drink whatever, and whatever the consequences are, that's the way it is going to be. I certainly wouldn't advocate that.

WILLIAM BRANGHAM: Why do you think this has been so effective?

LAUREL MIDDELAER: I think because the consequence is firm. I think that people respond when there's a harsher consequence. And I think, too, because it's aligned to a larger goal. Just like secondhand smoke, we have no tolerance for that anymore, just like when seatbelts came in, there was that fundamental shift. My goal has always been that there will be a fundamental shift that it's not OK to drink and drive. Drinking is fine. Absolutely -- drink whatever you like and enjoy and partake, but just don't mix it with driving.
at 8:00 AM