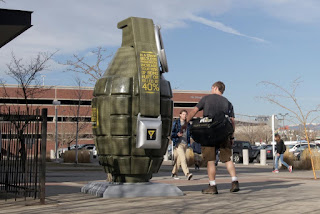 To stem the rise of passenger vehicle fatalities and increase seat belt use across the state, the Colorado Department of Transportation (CDOT) unveiled a 9-foot-tall traveling grenade exhibit. The mock grenade represents the dangers that unbuckled passengers pose in a crash.

The giant grenade isn’t a traditional “buckle up” message, but is designed to turn heads and spark conversation. Written in spray paint across the grenade’s seat-belt-material surface is: “An unbuckled passenger can be just as deadly.”

CDOT says the state is facing a traffic safety crisis, and while the grenade imagery may shock some people, it’s a necessary tactic to gain attention on the dangers of not buckling up. In a crash, unsecured passengers don’t literally explode, but they do turn into heavy, blunt projectiles that can smash into others in the car, causing serious injury and even death.

“This sculpture is bigger than life, and so is the issue,” said Sam Cole, Safety Communications Manager for CDOT. “A grenade may imply danger and violence, but so does every person who rides unsecured in a car. We need to change the way people think about beltless passengers.”

Newly released data shows passenger vehicle fatalities rose in 2016. Unbelted passenger deaths topped 180, and passenger vehicle fatalities overall climbed to 362. For a decade, rates were on the decline, but for the second year in a row, the numbers have moved in the wrong direction. And while deaths are up, seat belt use rates are falling. Only 84 percent of people in Colorado buckle up. That’s far below the national average of 90.1 percent.
The grenade represents the start of CDOT’s 2017 Beware of the Beltless seat belt safety campaign and will be displayed in public areas across the Denver Metro in the coming months.

Crash survivor Christie Haskell was at the grenade reveal and spoke first-hand to the dangers of riding with someone who isn’t buckled in. In 2002, Haskell was in a violent, high-speed, side-impact car crash. She was belted, riding in the back seat with a friend who wasn’t. Haskell’s friend flew into her, breaking Haskell’s collar bone and causing permanent hip, spine and neck damage.

Even though 15 years have passed, Haskell still walks with a limp and needs regular physical therapy. She says she can’t do some basic household tasks like folding laundry or loading the dishwasher — things most people take for granted.

“I just hope people can stop seeing the person sitting next to them as a friend, a brother, mother or any other loved one,” said Haskell. “If someone around you is not wearing a seat belt, they’re a dangerous object waiting to hurt you in a crash.”

Most Coloradans are responsible and do buckle up, but the 16 percent who refuse to do so account for nearly half of all passenger vehicle deaths on the road. A primary seat belt law in Colorado would make a big difference. Studies tracking the seat belt use rates in states with a primary seat belt law — Colorado is one of only 16 states without one — show that such laws raise use by six percentage points and save an estimated 22 lives in the first year alone. Colorado currently has a secondary seat belt law, which prohibits law enforcement from issuing seat belt citations unless they pull over a vehicle for another reason.

For now, CDOT hopes the touring grenade display will help convince those who aren’t buckling up that it’s time to start. Because, as it says on the sculpture’s base, “In a crash, beltless passengers increase your risk of being hurt or killed by 40 percent.”