A new GHSA/Ford Motor Company Fund report is helping to call attention to the dangers speeding poses for teens, our most at-risk drivers. One of the key findings of “Teens and Speeding: Breaking the Deadly Cycle” is that between 2015 and 2019 teen drivers (16-19 years of age) accounted for a greater proportion of speeding-related fatalities than all other age groups – 43% versus 30%. During this five-year-period, nearly 5,000 teen drivers and passengers died in speeding-related crashes.

The report took a deep dive into NHTSA’s Fatality Analysis Reporting System (FARS) data and revealed that the teen driver involved in these fatal crashes is more likely to be male, have run off the road or rolled the vehicle and be unbuckled. Nearly half of all teen drivers killed in speeding-related crashes were unrestrained. The FARS analysis also found that the youngest teen drivers (16- and 17-year-olds) have the highest fatal crash risk due to lack of experience, but 18- and 19-year-olds are more likely to crash later at night and on highways and freeways. And the likelihood of a teen driver having a speed-related fatal crashes rises exponentially with each additional peer in the vehicle.

Parents play a key role in addressing this deadly situation. The report offers real-world, practical tools and technologies they can leverage to help rein in speeding teens and reevaluate their own driving habits. The latter is especially important since speeding is typically passed down from parent to child.

Also included are 19 recommendations directed to the State Highway Safety Offices (SHSOs) and their partners focusing on speed enforcement, driver education and training, parent and teen engagement, peer-to-peer programs and more. To encourage implementation, GHSA is partnering with the Ford Driving Skills for Life program to make $100,000 in competitive grants available to the SHSOs. More information on the grants will be available this spring.

The report, infographics and new release can be downloaded from the GHSA website.

Cellphone Laws and Their Impact on Teens Calling While Driving

The findings of a new study funded by the National Institutes of Health (NIH) examined teen driver use of cell phones while driving (CWD) and found states with concurrent laws (a young driver ban plus a ban on hand-held calling for all drivers irrespective of age) are the most effective at getting novice drivers to hang up and focus on the road.

The researchers noted that further research into the effectiveness of cellphone laws is warranted, but “it is apparent that restricting [hand-held cellphone use by] drivers of all ages, including teens, may influence the traffic safety culture on distracted driving.”

GHSA is excited to announce that the 2021 Annual Meeting will be held in person in Denver, Colorado, September 11-15. Recognizing the many health and safety challenges we faced during the past 12 months, this year’s theme, “Moving Mountains: Forging a New Traffic Safety Landscape,” seems entirely appropriate.

Under the leadership of Colorado’s Carol Gould, the Annual Meeting Planning Committee is developing a robust agenda that will explore the impact of the pandemic on driving behaviors with a particular focus on speeding, impaired and distracted driving, and seat belt use. Attendees will dig into these persistent problems during plenary sessions and workshops as well as focus on other critical topics including the safety of vulnerable road users, automated vehicles, state highway safety office management, and more. GHSA is working with our partners and vendors to ensure that all safety protocols are taken.

GHSA is committed to including dynamic and engaging speakers in the lineup. At Monday’s welcome luncheon, attendees will hear from bestselling author Brad Meltzer. While readers may be familiar with his political thrillers, such as “The Inner Circle,” he’s also the creator of “The Lost History” television show and both a non-fiction and comic book writer. Meltzer will deliver a compelling message about how ordinary people can change the world. 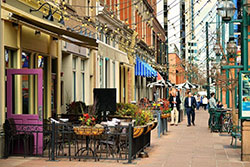 On Tuesday, GHSA will honor the recipients of the 2020-2021 Highway Safety Awards at the annual luncheon and later that evening host a special social event at a secret location (more to come on that). Attendees will want to stay through Wednesday’s closing luncheon as NFL Hall of Famer and Buffalo Bills quarterback, Jim Kelly, will provide insights on teamwork and leadership as he shares his personal story of perseverance and determination. It is sure to be an inspiring presentation that is not to be missed.

This year’s meeting will take place at the Sheraton Denver Downtown, which is located on the 16th Street Mall, a mile-long pedestrian promenade brimming with shopping, dining, night life and entertainment. Room reservations will be available later this spring and meeting registration will open in early June. Be sure to register before July 30 to take advantage of the special State and Associate Member rate of $550. Sponsorship and exhibit opportunities are also available.

Plan on joining the GHSA Board and staff in Denver this September!