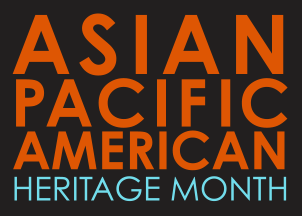 In the month of May, we highlight, celebrate, and acknowledge the history and contributions of Asian Americans and Pacific Islander Americans! Like many commemorative months, the recognition of Asian American Pacific Islander (AAPI) Americans originated with congress in 1977 celebrated as Asian Pacific American (APA)  Heritage week, then expanding the observance to the month of May in 1990. It was not changed to AAPI till 2009.

This broad categorization that brought the AAPI community to be recognized under one umbrella term encompasses many differences of ethnicities, nationalities, and cultures between the two and within the two races. What are the different identities within and between the two races? There are many! Just describing national heritage shows that AAPI cannot be considered a monolith. With 48 Countries in Asia and hundreds of Pacific Islands including those in Polynesia, Micronesia, and Melanesia, it would be difficult to group all of the different individuals into one singular category and expect uniformity. Understanding the differences and nuances will allow us to better serve Colorado’s various Asian and Pacific Islander communities. Please see some of the resources below to learn more!

Earlier this year, history was made by electing and inaugurating the first Black and Southeast Asian woman Vice President of the United States. Many before her and after her have and will shape American history as we know it. Below are two prominent AAPI individuals who have left a trail for others to continue to blaze.

Kartar Dhillon was a South Asian American political activist and writer. She wrote, “The Parrot’s Beak,” an autobiographical essay highlighting her experiences with racism in hospital settings, particularly as a pregnant woman, being denied health care because of her race, issues of gender, and navigating her parents’ cultural expectations and the culture surrounding her. For her work in advocacy for gender equity, compassion, and tenacity, she was awarded a Lifetime Achievement Award from the Punjabi American Heritage Society.

Philip Vera Cruz was a Filipino leader in the Asian American Movement, a farmworker, and a leader in the labor movement. While most people associate the Delano Grape Strikes with Mexican Americans and César Chávez, they were started by Filipino-American workers, of which Vera Cruz was one of the early organizers and was instrumental in the creation of the now-famous United Farm Workers (UWF). Vera Cruz continued fighting for workers’ rights and inspiring college students to fight for the underrepresented for the remainder of his life.

- This publication was written by CDPHE's Jeanna Beard with MERG edited by Jignasa Jani, Phuonglan Nguyen, and Anya Nystrom.
at 7:00 AM