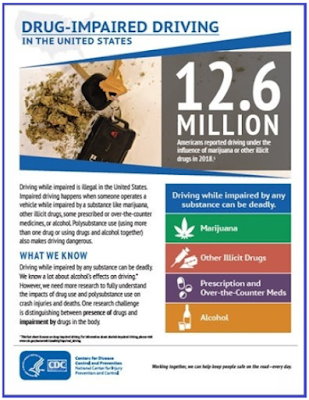 Impaired driving happens when someone operates a vehicle while impaired by a substance like marijuana, other illicit drugs, some prescribed or over the counter medicines, or alcohol. Over 12 million Americans reported driving under the influence of marijuana or other illicit drugs in 2018. Driving while impaired is illegal in the United States and can be dangerous or even deadly. We know a lot about alcohol’s effect on driving. However, we need more research to understand the effect of drug use and polysubstance use (using more than one drug or using drugs and alcohol together) on crashes. There are promising strategies that can assist states and communities with preventing impaired driving.